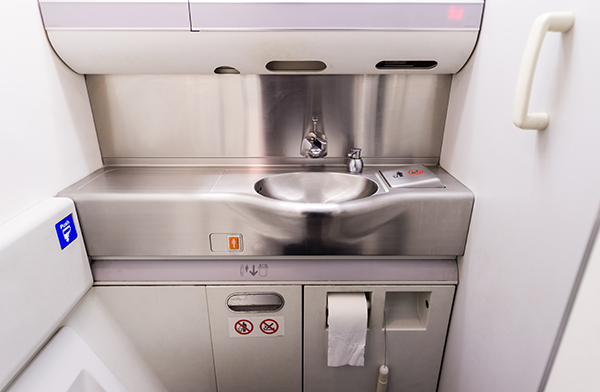 If you’ve kept up with the Spy Catchers blog for any length of time, then you know about the offensive violation of privacy being caused by hidden cameras and hidden audio bugs. Starbucks, universities, private homes, fire stations, funeral homes, and now we add a first-class airline bathroom to the list. We simply cannot let our guard down when it comes to our privacy.

A woman flying first-class from San Diego to Houston on a United Airlines flight entered the bathroom where she discovered a small, blinking light. Although she thought it could be part of the airplane itself, she decided to take a closer look. She discovered that it was a device wrapped in a paper towel. She immediately alerted the flight crew. After its inspection by United Airlines security, it was determined to be a spy camera placed originally on the bathroom’s door frame at the beginning of the flight.

The news story stated that the perpetrator who placed the spy camera was identified despite his attempt to hide his face from the camera. He wore jewelry that made it easy for him to be identified. Choon Ping Lee was ultimately arrested for the spy camera. The FBI, who reviewed the footage and had possession of the spy camera after its discovery, also determined that this is not the first time the perpetrator used the device in an airline bathroom. The device still held previous footage of two women from a different flight using the facilities. Lee is facing a charge of voyeurism.

Remember to Always Pay Attention to Your Surroundings

Whether you’re traveling by airplane, train, or bus, remember to always carefully survey the bathroom before you use it. The same can be said for any hotel room or Airbnb you stay in. Always pay attention and look for the common signs of a hidden camera. The most common places they are hidden is under the sink with a clear view of the toilet or shower (for living accommodations), under changing tables, within electrical outlets, on top of door frames, and even inside of showers. Look for blinking lights or small devices that definitely seem out of place. If you find something, contact management as well as the authorities. You may very well be the key to stopping someone who is preying on others.

If you think that someone may be using a hidden camera or audio device to spy on you, contact Spy Catchers at 1-800-373-8726. Our professionals can sweep your home, office, and vehicle to help you regain your peace of mind and your privacy!