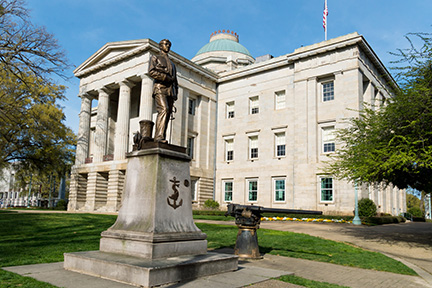 Invasion of privacy is a legitimate crime in North Carolina. It involves the intentional intrusion on the solitude or seclusion of another or of their private affairs or concerns that would be seen as highly offensive to a reasonable person. There are people who’ve been tried under North Carolina law that have been found guilty of invasion of privacy because of their use of these devices.

What’s the Law in North Carolina?

Laws related to the use of audio bugs, hidden video cameras, and GPS devices aren’t as strict as they are in some states. What does this mean for you? It means that while there are some instances where the law and the courts may feel compelled to step in since the Supreme Court’s ruling on the use of such devices (particularly if the actions may fall under North Carolina statutes for cyber stalking), it could be primarily up to you to protect your privacy.

North Carolina did strive to clarify the use of GPS devices in North Carolina. A parent is allowed to track their minor child in a vehicle that is driven by the minor. A parent can track the caretaker of their minor child; however, the GPS device may not be located on the nanny although it could be attached to the nanny’s vehicle only on times when the nanny is supposed to be caring for the child. It can also be used by a private investigator. GPS devices are not allowed to be used by a private detective to track a victim of domestic violence even if the alleged abuser owns the vehicle. The victim cannot be tracked by GPS if they have a Domestic Violence Protective Order that was issued by the court. GPS devices may be used to track a fleet vehicle that is owned by a business.

North Carolina also has the North Carolina Electronic Surveillance Act. It covers recording telephone calls, using secret video, hiring a private investigator, and using a GPS on a vehicle (just to name a few). This law is often cited when someone is accused of violating another person’s privacy. In North Carolina, recording a phone call is only legal if you have the consent of one person who is part of the conversation. Recording devices in the home, such as a hidden audio bug, isn’t always seen as a violation of privacy. However, using a hidden camera may be considered a violation of privacy unless it is seen by the court as a necessary step in protecting minor children. The Act does prevent one spouse from recording the other spouse in the family home if the hidden camera has audio.

Why Would a Hidden Audio Device, Hidden Camera, or GPS Device Be Used Against You?

If you live in or run a business in North Carolina, you may be wondering why anyone would use a hidden audio device, hidden camera, or GPS device against you. For businesses, the answer is often fairly simple: there’s an unhappy current or previous employee or jealous competitor who wants to damage your business.

When it comes to North Carolina residents, there is a variety of reasons. The most common being that the resident is involved in a lawsuit of some sort (including divorce, child custody, workers’ compensation, slip and fall, and car accidents), allegations of domestic violence, nosy landlords, and stalking by a former or current spouse or significant other. As experts, Spy Catchers LLC has been involved in instances where there was practically no conceivable reason where these devices were used at all.

What Should You Do If You Think You’re a Victim of a Hidden Audio Bug, Camera, or GPS Device

If you live in or own a business in North Carolina and believe that someone may have bugged your home or office, you need to engage in some countersurveillance methods to protect your privacy.

In North Carolina, improper use of a GPS tracker can result in a civil or criminal lawsuit. With civil actions, the person who places the device could be forced to pay for mental anguish, humiliation, and other factors. If the perpetrator is found guilty of violating the Federal Wire Tapping Act, they may be forced to pay fines and could spend up to five years in prison.

If you live in North Carolina or if you own a North Carolina business, you could be a victim of a hidden audio device, hidden camera, or GPS tracking. If you believe that your privacy is being violated, remember to not mention it to anyone. Instead, call Spy Catchers LLC at 1 (800) 373-8726. If you believe that your phone could be bugged, use our contact form. Let us help you protect your privacy!